With A Dugout Full Of Returning Talent, Valley Christian of San Jose Prepares For A Year Of New Challenges As It Chases A CCS Open Division Repeat

At 53, John Diatte is not nearly old enough to have come from the time of Satchel Paige. Maybe because he’s been guiding the baseball program at Valley Christian High School in San Jose for nearly three decades, it just seems that way.

In that time, the Warriors’ manager, now entering his 29th season, has seen enough that he’s well familiar with some the most famous words ever uttered by Paige, the Hall of Fame pitcher noted for being a legend in the Negro Leagues, for making his major league debut at 41 and appearing for the A’s (Kansas City version) at age 58.

Don’t look back. Something might be gaining on you.

Or, in the case of Diatte’s team, some schools. 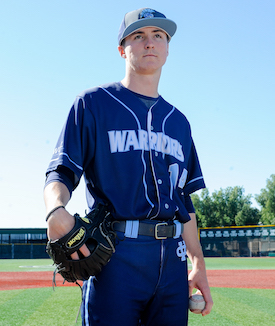 Arkansas-bound Patrick Wicklander will anchor the Warriors staff again in 2018.

“You know,” Diatte said. “It never gets any easier.”

Sure doesn’t, especially in the WCAL. Not when you’re the preseason No. 1 pick in the Bay Area, No. 2 in Northern California and No. 4 for the state (according to the Cal-Hi Sports rankings). Not when you are the defending Open Division champion in the Central Coast Section. Not when you’re riding the wave of three one-run playoff victories that catapulted you to that title as a No. 13 seed.

Not even when you return darn near everybody from that glorious experience.

“We know that we have all the talent to be just as good, if not better,” pitcher Patrick Wicklander said. “We have guys that know how to win. Now, it’s just a matter of recapturing that form.”

That’s just it, though. Some forms — kind of like Paige himself — are unique to themselves. Even Diatte acknowledges that the 2018 Warriors must create their own personality, their own winning formula, separate from last year’s group that stumbled through the first half of the season (8-9-1) only to win 14 of its final 16 in the second half.

“It was kind of the perfect storm,” Diatte says. “A lot of things came together, a lot of guys stepped up. … It’s a fine line before just leaning on that and this year. Every year is new. There’s a feeling-out process. Are they overconfident? You want them to be confident and lean on what they did last year, but not get overconfident. You don’t want to put the fear of the world into them about the same stuff not happening or let any doubt creep in. So it’s a fine balance. We’ve had good practices and bad practices so far, and we’re trying to keep a balance of where our expectations are based on that.”

That said, the expectations have rarely been higher. And few teams are as equipped to meet them like the Warriors. Valley Christian returns half of its title team, including three of the section’s top pitchers, the league’s leading hitter and three others who finished in the top 20.