Out Of The Fire with Maiya Flores

October’s Devastating Tubbs Fire Erased Her Home And Ravaged Her School — But It Couldn’t Damage The Spirit Of Cardinal Newman’s Maiya Flores.

Note: To check out more SportStars Magazine coverage of California girls basketball plus many more free features from other sports, CLICK HERE. 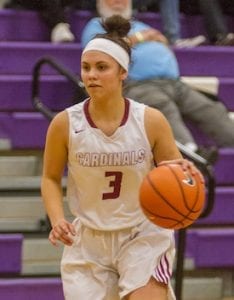 Fans who witnessed Cardinal Newman High play in its West Coast Jamboree championship game on Dec. 30 didn’t just see a top-notch girls basketball team in action. They experienced a genuine heartfelt postgame moment that transcended anything that has just occurred on the court.

There weren’t many dry eyes in the College Park High gymnasium when senior guard Maiya Flores was presented with a plaque for the tournament’s Jim Capoot Memorial Award. In this truly emotional moment, the public address announcer became choked up while presenting Flores during the post-game ceremony.

Flores, who scored 22 points in the 68-51 Jamboree Diamond Division championship game loss to Dimond of Anchorage, Alaska, has continued to thrive on the court after the October wildfires that devastated the North Bay Area hit her particularly hard.

She and her family lost their home in the Tubbs Fire, a blaze that destroyed more than 5,000 structures over three counties and carved a particularly gruesome path through Santa Rosa. That path included Cardinal Newman’s campus, which suffered significant damage.

“You face challenges your entire life,” Flores said after the game. “This is just an obstacle in the road. It will make us stronger people as we get older. For me personally, I lost everything, so it makes me feel so humble and grateful for everything I have, and all my teammates.”

The Capoot honor is named for the former Vallejo High girls basketball coach and Vallejo Police Department officer who was killed in the line of duty in 2011.

“It’s always impressive to see how young people can rise to the challenges of life, but what Maiya Flores has done is truly exceptional,” said West Coast Jamboree co-tournament director Clay Kallam. “The Jim Capoot Award was really meant for players just like Maiya, and she exemplifies the attributes the West Coast Jamboree looks to celebrate.”

For Flores, her teammates’ support has been vital since she lost her home.

“Checking in on me every day, wishing me the best, giving me anything I need,” she said. “Just being there for me mentally, and just being all-around good people.”

And more so than ever, basketball is an important outlet for her.  [READ MORE]

Mike Wood is a longtime prep writer/editor concentrating on schools in the CIF North Coast Section and East Bay. Chace Bryson is the managing editor of SportStars Magazine. He can be reached at Editor@Sportstarsmag.com.

<< NorCal/SoCal Players of the Week
Column: Watered down CIF divisions? >>