Note: To check out more SportStars Magazine coverage of this year’s CIF state football finals plus many more free features from other sports, CLICK HERE.

Partially because the many things the Padres of San Mateo accomplished this season never came easy.

And also, more importantly, many of those same things had never been accomplished by any of the Serra teams which came before the group.

That, of course, includes winning a CIF State Championship now. 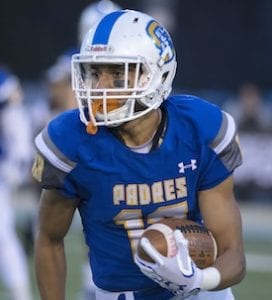 Of course that didn’t come all that easy either.

With a 14-0 first half lead gone after Cajon tied the game 14-14 with a 99-yard drive late in the third quarter, the Padres weren’t quite in a tailspin, but the engine was sputtering. That’s when junior Malakai Rango delivered the game-changing play by returning the ensuing kickoff 72 yards to the Cajon 2-yard line to set up David Coker’s go-ahead touchdown run. It was the first of 24 unanswered points to close out a 38-14 win for the program’s first state bowl title.

“You definitely felt the momentum shifted automatically to our side,” Serra running back Isiah Kendrick said of the return. “I’ll never forget that.”

Fans of Serra football won’t soon be forgetting Kendrick’s performance in the game, either.

The senior racked up 180 yards of total offense and scored four touchdowns on the night. He gave the Padres a 14-0 lead with the first two scores of the game, a 14-yard screen pass midway through the first quarter and a 2-yard run with 5:30 to go in the first half.

Meanwhile, the Serra defense was doing everything short of Jedi mind tricks on a Cajon offense that came into the game with video-game like numbers.

The Cowboys (14-2) came into the game averaging just shy of 49 points a game. One week earlier they defeated Rancho Verde-Moreno Valley 70-23 in the Southern regional game, scoring 50 in the first half. Quarterback Jayden Daniels entered the game having thrown for nearly 5,000 yards and 61 touchdown passes. His favorite target, 6-foot-8 receiver Darren Jones, had caught 92 balls for 1,962 yards and 27 touchdowns.

A Hail Mary throw to Jones on the last play of the half got Cajon on the board, but the Cowboys 99-yard scoring drive in the third quarter was the only possession in which they had any sustained offensive success. 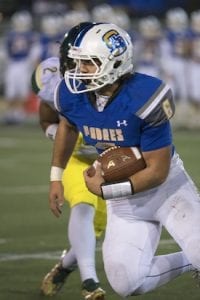 Junior linebacker Edmond Lahlouh heads the other way after a first-half interception in the CIF 2-AA State Bowl.

The championship victory healed the wounds of last season when the Padres lost the CIF 2-A State Bowl 42-40 to Sierra Canyon-Chatsworth on the same field. The 2017 win also was the first in CIF State Bowl victory in seven tries for the renown West Coast Athletic League. St. Francis-Mountain View would add a second one night later.

As far as Walsh was concerned though, this championship belonged solely to his Team of Never.

“It’s a historic league, but this is internal,” the 17-year coach of the Padres said. “I love the league and I love my colleagues, but this is something to be celebrated inside the walls of Serra High School right now. I said that last year when we lost, we’re not going to wear the banner of losing for the WCAL and or winning it.”

After Coker put Serra ahead for good with 2:45 left in the third quarter, Kendrick would add sandwich touchdown runs of 1 and 5 yards around a 39-yard Damon Lewis field goal. Kendrick finished the night with 110 yards rushing on 26 carries and 70 yards receiving on four catches. Coker rushed for 140 yards on 13 touches.

“It was a crazy intense game,” said Kendrick, who had 180 yards of total offense, including 110 on the ground with three scores. “When it came down to it, our conditioning paid off and who was stronger out front paid off.” 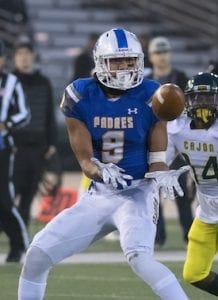 Patrick Nunn made plays on both sides of the ball in the CIF State Bowl, which included his first ever work at cornerback.

Defensively, Serra’s stars included junior linebacker Edmond Lahlouh. He led the Padres with 14 tackles while adding 2.5 sacks and an interception (just Daniels’ fifth all season). Tevesi Vakalahi finished with 11 tackles and a fumble recovery that Serra would eventually capitalize on for the first score of the game.

And then there was Patrick Nunn, a senior who drew the assignment of guarding Jones. In his first game ever at cornerback.

“Oh my God. Patrick Nunn,” Walsh said. “First game ever playing corner against an NFL-potential wide receiver. Well, maybe we have an NFL-potential corner out there. It was unbelievable the effort he put into his trade. He’d never practiced corner.”

Jones caught nine passes in the championship, including the Hail Mary touchdown, but Nunn denied a handful of other big catches. One of those denials was on a fade route jump ball on fourth-and-goal midway through the second quarter.

“Phenomenal,” Kendrick said about Nunn, who also caught three passes for 33 yards on offense. “Coach threw him in there on Monday and he learned it like that. He’s an athlete.”

It was a move that just seemed to fit — with the Team of Never.

Chace Bryson is the managing editor of SportStars Magazine. He can be reached at Editor@Sportstarsmag.com.